We are happy to announce that version 7.0 went online. This new version includes several minor changes in the background to ensure user convenience.
The main innovation is the inclusion of trait information according to the work of Henri Tachet and colleagues (Tachet H., Bournaud M., Richoux P. & Usseglio-Polatera P. (2010): InvertÃ©brÃ©s d'eau douce - systÃ©matique, biologie, Ã©cologie. CNRS Editions, Paris, 600 p.), resulting in Europe's most comprehensive trait collection for macro-invertebrates. We are grateful to Henri Tachet for giving permission to make these data available online and to Philippe Usseglio-Polatera for providing the data and the brief explanations for each of the traits!

To facilitate the registration process, we have now added a  registration site. Just enter your name, institute and research interests and you will be provided with a login and password within a few days.

Version 6.0 of freshwaterecology.info offers - among others - the following new/additional features:

Please note: we are currently reviewing the ecological parameters of fishes and working on the classification of Odonata. These data will be available soon.

We have now published the work on freshwaterecology.info summarsing our efforts of the past ten years in Ecological Indicators:

The following ecological information is now available for phytoplankton: approximate size classes, morpho-functional groups according to Salmaso & Padisak, size class trophic scores and indicator values as well as morpho-functional trophic scores and indicator values. Please see  Experts and  Terms of use (citation) for the contributing experts and correct citation. 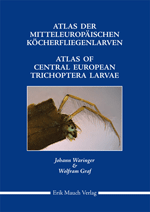 The Atlas is a comprehensive update of the successful predecessor "Atlas of Austrian caddisfly larvae". It follows an innovative concept by supplementing the proven dichotomous key with a completely new synoptic key. The synoptic design arranges similar species within one page, thereby supporting identification by the simultaneous use of several morphological details.

The geographical framework has been greatly expanded by including all caddis thus far (2011) described in Austria, Germany and Switzerland. Due to the rich structure of the Central European species inventory and the text layout in both German and English this Atlas will be useful also far beyond the immediate geographical target area defined above.

The book can be ordered for 128 Euro at  Erik Mauch Verlag.

The DAET project is organised by  Astrid Schmidt-Kloiber (astrid.schmidt-kloiber@boku.ac.at) and   Peter J. Neu (peter.neu@trichoptera-rp.de). It is partly funded by  BioFresh. Within this project we want to collect as many (adult) Trichoptera distribution data from Europe as possible. We think that in times of increasing importance of biodiversity, we should also point the way regarding caddisflies and raise the public awareness of this important insect group. If we get a good coverage of Trichoptera data in Europe we will aim for an IUCN list of threatened species.

This enormous undertaking very much relies on the help and willingness to contribute of an extensive number of private working caddisfly experts from all over Europe. We therefore invite all persons out there working on Trichoptera to contribute. For more information, please visit the  DAET website.

We are grateful to those who have already submitted their records! THANK YOU!

The following innovations, improvements and changes were implemented into freshwaterecology.info:

Help
How to use the database
Abbreviations/explanations